Richard Harman, owner of bloggersmakemoney.com, is one of the top social media bloggers of 2013. I recently had the chance to interview him.

His blog was nominated for the top ten social media blogs of 2013 contest organized by Social Media Examiner.

What made you choose Blogging as a full time career ?

Well I actually didn’t choose blogging…it chose me. I am from a coal mining community, and actually 33% of America’s coal reserves comes from my town! So naturally, I fell into the cycle of being a coal miner like my father, and his father, and his father before him. About 2 years ago, I was working underground when I actually got ran over by a piece of heavy mining equipment! I was working on splicing some high voltage cable when someone in a coal hauler came around the corner without seeing me. I managed to throw myself almost out of the way and the 20 ton piece of equipment managed to only mangle my leg. Turns out it looked worse than it was, shattering my left kneecap and destroying some cartilage and things that make my leg bend at the knee. So naturally, that put me out of work.

Around here, there’s only two really good paying jobs that you can do: A doctor and a coal miner. Since most of the men around town don’t usually have enough money to go to school, they ended up being coal miners…so there really wasn’t any more options for me when I got hurt.

I always knew that you could make money on the internet. I was seeing people on T.V. brag about how they made millions in less than a month online (I later found out that this was just a scam), so I went for it! Expecting to be rich within a week, I started a blog, without knowing anything about it! When I finally realized that I was going to have to work hard to make this work, I was already hooked on blogging! Turns out, I can write pretty good and people enjoy reading too!

Who influenced or helped you the most in taking your blog forward ?

At first, no one. I was alone, and didn’t want to be! As I blogged, I got to know who was popular and who wasn’t in the blogging industry. I could always tell because the popular one’s wouldn’t have anything to do with me!

After a bit, I actually got Jeff Bullas’ attention and he helped me get started with one of the coolest scheduling tools for social media that I still use today. So I would have to say Jeff Bullas at first. Now, there’s a lot of them that really influence me…both popular AND unpopular bloggers.

You mainly concentrate on Social Media Marketing. Can you tell us why you chose social media as your field of expertise ?

Well, for one thing, SEO work is lonely business. While getting your posts on the first page of Google is a romantic idea, building links day in and day out gets monotonous. I’m a social person and love people. So naturally, I’m drawn to social media. Turns out, building links may not be the best strategy after all. With Google on the rampage all the time, you are just safer to be on social media.

My friend, building relationships is the most important thing that a person can do in blogging! If you have a new blog, then you need to get out there and promote yourself! Make friends and build connections! This will eventually end up in people linking back to your site, sharing your posts, and creating opportunities for you in different forms: either in guest posting, or a great interview opportunity with Lahaul Seth 🙂

Apart from social media, what are your other sources of traffic ?

Google is starting to become a great source of traffic for me as well! When you start having a lot of posts, then you give the search engines more options for your blog. It takes some time to get established on Google, and that’s why it’s so important to fix your Google Authorship Markup for your blog so your posts will become more visible.

What are your main sources of income ?

My main source of income comes from affiliate links. However, I have money coming in from social marketing consulting gigs and speaking engagements too.

Affiliate Marketing or Advertisements, which one do you prefer when it comes to making money online ?

Well, as you can see from my blog, I don’t have many advertisements! I prefer affiliate marketing because there is more money to be made that way. At least until someone offers me $600 per month for an ad! lol!

You recently organized a big twitter event with some top bloggers and marketing experts. Can you give us a little detail about what was the event about and who were part of the event ?

Sure, this was something I did by the seat of my pants (like almost everything). As you have already guessed, Twitter is a hard platform to get followers from. At least on Facebook you can add people and if they become your friend, then you got them! But on Twitter you can follow someone without them following you. So that was my main premise behind the whole idea of the Twitter event-to get followers.

I actually started promoting it about a month before it started. I went to Fiverr and got someone to create me 3 banner ads for $5 that I could distribute to the featured 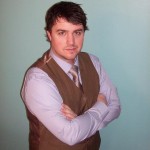 people that would be on the chat, and it really got bigger than I could have ever imagined! Turns out it was the biggest chat that had been established on TweetChat.com this year!! You can view the event on storify here – http://storify.com/Ileane/social-media-marketing-strategies-for-2013-twitter .

As you can see, there were established bloggers like Marcus Sheridan, Ileane Smith, Allie Rambles, and Brian Clark just to name a few!

You have two published Ebooks. Can you tell us what the books are about and how one can acquire them ?

I do have two ebooks. The Blog in You that shows people how to set up and start with blogging as a career and how to get established. This book is $9.99 and I have a free ebook that is listed in the sidebar of my website called Boost Your Social Media Traffic Overnight that really builds your social presence and drives traffic!

You were recently offered a job by Twitter to be their Social Media Director in California. Have you made any plans for that ?

Lol, not really! While I am still considering it, I don’t think my wife is going to go for it! For that matter, I would have to quit blogging altogether too if I took the job! That’s just a whole different ball game there, and even though some people consider me to be a good social strategist…am I good enough for Twitter? Lol, who knows? I may up and move across the country and do it. I would miss my friends though! Although I would see you guys tweeting and everything!

Which blogs would you recommend to read for new and probloggers alike ?

One of my favorites is http://www.jonloomer.com/blog this guy was nominated along with me for one of the Top Ten Social Media Blogs of 2013 and he really knows a lot about Facebook that can help anyone!

Another good blog that can really help you is http://www.socialmediaexaminer.com and http://www.jeffbullas.com

Yup, don’t give up. You’re not going to see results the first 3 months of blogging. All you need to do is be consistent with it. Create a posting schedule and stick with it. If you’re just starting out, 1-2 posts per week is enough. Use the rest of the time to build your social media profiles and make friends. You will find that in time, if you’re creating awesome content, people will start to notice you! Blogging is not a get-rich-quick job. It’s long and tedious. It’s hard work. But the payoff is outstanding!

I would like to extend my sincerest Thanks to Richard Harman for taking some time out of his busy schedule for this interview.

What do you think about this interview ? We love to get feedbacks. Share your views with us and congratulate Richard Harman for his achievements in the comment section.

Interview with Richard Harman – One of the Top Social Media Bloggers of 2012 shar.es/YytHA via @lahaulseth @makemyblogmoney